A downloadable game for Windows

I played Zaga-33 by Michael Brough and liked it a lot. So, I decided to remix it with some different enemy/item types.

If anything, I hope you like the main menu and can zone out to it.

If you're unfamiliar with Zaga-33, it's a "coffee-break roguelike" that places emphasis on observing enemy AI behaviors and using items at key moments.

You can play the original Zaga-33 here, this game wouldn't exist without it:

I borrowed some sounds from Zaga-33. I added a couple of my own.

A lot of the art/tiles are from Cellusious's (http://cellusious.tumblr.com/) art digest for subscribers. I did some of the tiles/animation myself, but anything that looks good here is because of him.

Samples from the following Stars of the Lid songs are used:

The Lonely People (Are Getting Lonelier)

SPECIAL THANKS to testers:

and THANK YOU for playing!

If you find any bugs, feel free to let me know at tony.perriello@gmail.com

This was made with GameMaker: Studio. Windows only, sorry. :( 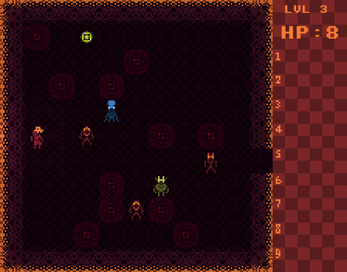